In January of 2022, it was announced a new camera was about to hit the market. Kind of, anyway.

Shortly after mine had arrived, a couple of weeks after I’d pre-ordered it direct from Reto, I was lucky enough to have a February day sunny enough to load up some Kentmere Pan 100 and take it out for a test drive.

For this, I headed to the small town of Southwell, where I split the roll of Kentmere between the large minster and the narrow streets.

The setting was picturesque, the light and shadows were ideal, and the budget-line film is straight outta the Ilford factory. Which meant no excuses should the images from the Reto Ultra Wide & Slim have turned out a bit rubbish.

You can scroll down and read on to see if they did or not.

The first three shots from the Reto Ultra Wide & Slim

Despite not living too far away, I don’t really recall ever going to Southwell just to walk around the place before. I presumed the Minster would provide a fair number of shots, but I wasn’t sure how interesting the rest of town would be as far as my photography goes.

As it turned out, I took a few before I even reached my intended ecclesiastical location. The light was so good that day that in many cases I valued just using that more than finding so-called interesting objects or subjects to shoot.

I have said many times on here that the main subject of a photograph is the light anyway, but that’s not something to go too deeply into right now.

So the first three shots from the Reto Ultra Wide & Slim turned out as follows. A view down a road called Westgate, and a couple of a metal cross I spotted in the car park next to that phone box.

For the last one, I’d read about the lens flare you can get from the plastic lens in the Reto, so that’s what I went for there by shooting into the sun. And I can confirm that yes, you can indeed expect some flaring if you do that.

Shooting the Reto around Southwell Minster

I’m not really a religious man. And if I ever became one, I don’t envisage it being with this particular religion either. But that doesn’t mean I can’t enjoy being around the structures that have been built for this particular God.

I do find them interesting, peaceful, moving, humbling, and inspirational. And perhaps some more adjectives too but I think five is enough for now.

What that means though is that, even I don’t believe as such, I do find them to be places I enjoy taking photographs both of and at. Because, just like any of the temples I went to in Asia, I like being there in the moment as much as I like the results I get afterwards.

That’s what happened here too. Although this Kentmere Pan 100 was the first roll I put through the Reto UWS, which means I didn’t really know how they would come out, I did feel good shooting it that day.

The wide 22mm lens is a lot of fun to compose with and I had a feeling the terrific light we were blessed with would lead to some nice contrast and light and shadows, which seemed especially important as I went with a monochrome film.

With all that in mind, here are my shots from Southwell Minster with the Reto UWS.

There’s another example of that lens flare that you can get when shooting into the sun with it below, while the final image of this batch – the one that looks through the gate and out onto the street – is a clue to where I went to finish this 24-exposure roll.

Shooting the Reto around the streets of Southwell

Although I found Southwell Minster to be immensely photogenic that day, in that light and looking through that wide lens, I wanted to shoot more than that while I was testing out the Reto camera.

So once I thought I’d got enough images from there and had left myself enough to have a good number from elsewhere, I headed into the town to see what the streets could give me.

Now obviously, this is Southwell we’re talking about. To quote Wikipedia, “the town is something of an oddity in North Nottinghamshire, being visibly affluent compared with neighbouring Newark-on-Trent and Mansfield“.

We’re not in 1970s New York or anything. So when I say the streets here, I’m not really alluding to the photography genre. I just mean the actual literal streets of this quiet little market town.

I wasn’t looking for anything gritty or deep or meaningful. Just some more nice light and shadow to play with, to see how the Reto Ultra Wide & Slim and Kentmere 100 did.

Wrapping up from this Reto test in Southwell

Overall, I’m happy with what I got from that day shooting the Reto Ultra Wide & Slim around Southwell. There was the enjoyment of doing it at the time, and there’s having some results that I like to show for it now too.

It’s always a touch uncertain how your images will turn out when shooting the first roll in a camera, which is why people often put a test roll through them before using them for anything more important.

That’s true even if the camera is brand new like this one was. And that’s why I had a sense of relief as well as of happiness when I got these scans back and saw no blank frames or light leaks or overlapping images, or anything else undesirable.

The Kentmere Pan 100 looks a lot more contrasty than the ISO 400 version did when I shot that, and I think that’s down to the lens on this camera as well as the film. And the light of course, too.

All in all though, this was a good first outing for the Reto Ultra Wide & Slim, and subsequent rolls I’ve put through it came out pretty well too – like these on Kodak Gold that I shot in Great Yarmouth and these on Ilford HP5 Plus that I shot in the same town too, for example.

You can see all the shots I’ve taken with it and gotten around to publishing here, as well as a full review of the camera itself right here.

If you have any interest in buying one of these yourself, I do recommend you check out that latter post in particular. 🙂

If you enjoyed that piece on testing the Reto Ultra Wide & Slim in Southwell, why not have a look at some of these other film photo essays too: 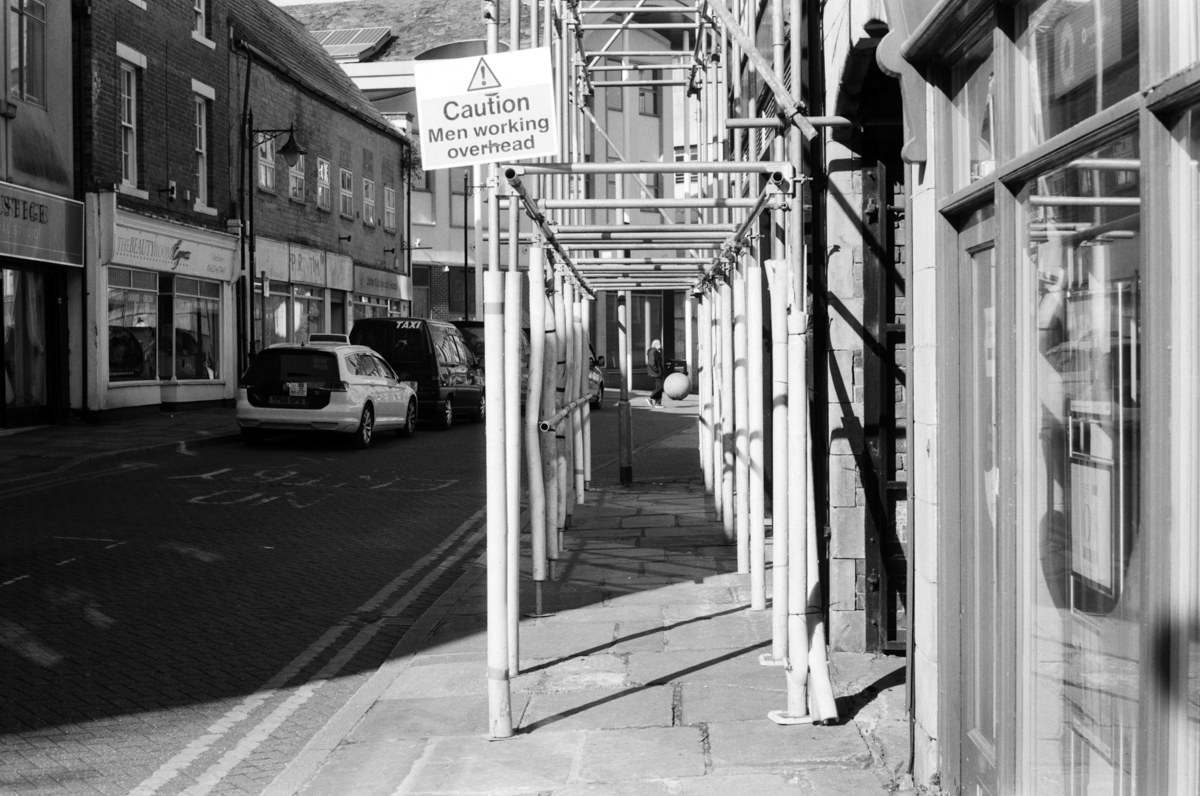