I guess it’s funny what different people do and don’t feel comfortable doing. For me, as most of my photography on this site shows, I was okay walking around Shanghai taking photographs of strangers.

UrbEx in Shanghai, though. Urban exploration. Going into places you maybe shouldn’t be in and taking photographs. I enjoy looking at the work of others who do it and I can understand how finding and documenting the places is a thrill. But I don’t really want to do it myself.

Conversely, there are people who absolutely love doing the urban exploration who are worried about the reaction they might get if they point their camera at the aforementioned stranger in the street. Different strokes for different folks.

So if I don’t enjoy wandering around places I maybe shouldn’t be in, why have I got some photographs from a time I did it? Read on and I’ll tell you. It all started in a WeChat group

If you’re ever in Shanghai and want to find some people to shoot some film with, or digital if you prefer, there’s a decently sized WeChat group you can join.

It was agreeing to go on a meet-up through there that I ended up making photographs of derelict buildings rather than the people in the streets I usually do.

I didn’t know that’s what we were going to be shooting, but to be fair I didn’t ask. So when we met up and headed through a gap between a gate and its gatepost, all I could do was follow.

After all, I hadn’t gotten up early just to look laaame in front of three people I’d never met before. It was only an old yard though. Not like we were going into any buildings, at this point.

Behind the gate was a large derelict area filled with the abandoned bicycles you saw already, broken walls, discarded furniture, and a lone respirator mask that may have been left behind when the graffiti artists had finished. I think one reason I never wanted to do any Shanghai UrbEx was that I had too much to potentially lose by getting into trouble with the authorities. That’s true of being in any foreign country, but it’s a bigger concern when you live there.

I’m probably being melodramatic but the risk of getting kicked out – not necessarily from this endeavour – meant I always kept my head down and nose clean as much as possible. It’s enough that unforeseen circumstances can happen. I wasn’t going to risk my situation unnecessarily.

So when the next stop that day was an abandoned building next to a police station and they let us walk straight in without saying anything, I actually felt a lot more relaxed about the whole thing.

The broken windows theory didn’t seem much in evidence, what with the officers seeing a whole load of them every time they went to work, but it did give us some decent shots through the frames back to the outside.

It’s worth noting too, from a film photography standpoint, that this budget Kodak film did okay with the low light inside and contrast between outside and in, especially with the first of these. I think it must have been backlit from another broken window. 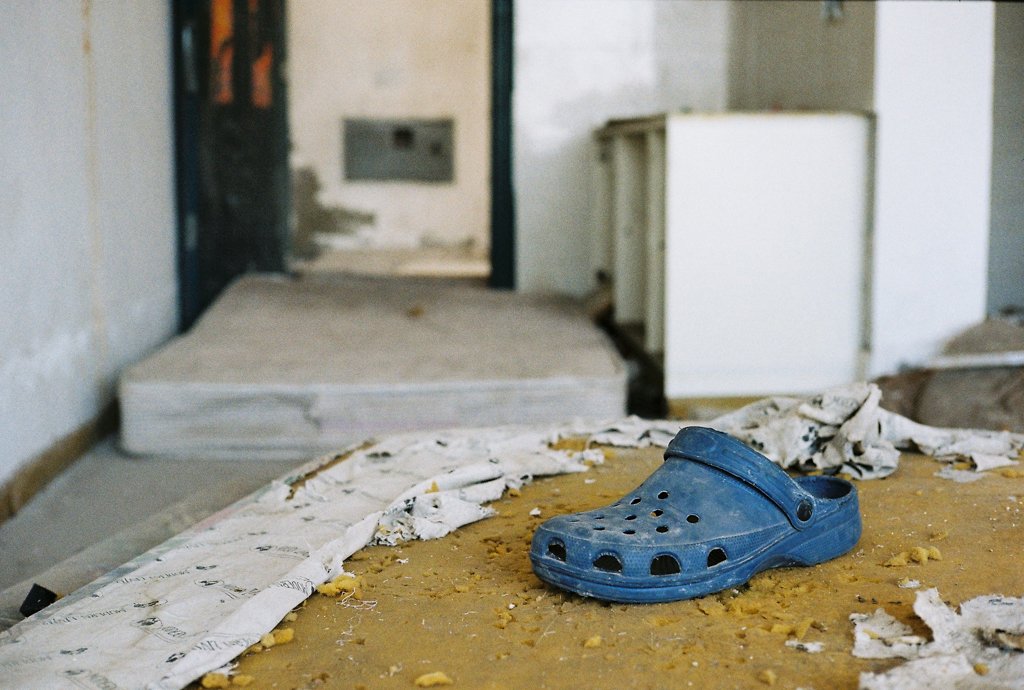 I do not recommend this restaurant

Next on the menu was a visit to a nearby abandoned but open restaurant, which only served to bring my comfort levels back down again. This was mainly due to a guy who appeared near the top of the staircase we’d climbed and stood watching us until we left.

That said, I got the impression he was maybe living in there and wasn’t merely watching us until we left. It felt more like he was trying to make us feel uncomfortable enough that we left sooner than we would otherwise have done.

It certainly worked for me. We had no idea if anyone else he knew might have been on their way or even blocking our way out. I was just looking forward to the time we were all safely past him and back onto the street.

Before that though, I’d taken one passable shot in the restaurant and two that were rubbish. One where I had very soft focus on a teapot and another where I managed to focus on some broken plaster instead of a sauce jar. A couple of good results from the day

In the spirit of keeping things positive as I like to do on this site, I’ll end the photographs here with probably my favourite two from my lone day of China UrBex.

They were from yet another building that we went to after the restaurant. Again the door was open, but this time we didn’t see a soul in the whole place, from the first floor to the top.

All I’ll say about these final two images is that the ColorPlus impressed me again with how it dealt with the light and shadows, and also the mood of the shots.

If I’d known where we were going to be shooting, I wouldn’t have loaded an ISO 200 film. That’s why a few of the indoor shots here were taken wide open. But for a film nobody seems to love, I think it did well enough all day, inside and out.

The earlier messed up shots were my fault, not the Kodak’s. Announcing my retirement from Shanghai UrBex

When I called this piece a spot of UrBex in Shanghai, I wasn’t joking with that amount. It really was only a spot, and I think that’s probably enough for me. Call me soft but I get too worried about being caught to enjoy it.

When the police effectively let us into the building next to their place, I was fine. But how often does that happen? I’ve no idea, and I’m not really interested in finding out.

Of course, UrBex in China or anywhere else isn’t limited to derelict places. There are plenty of fully operational buildings people like to climb to the highest point of too. And I’m even less likely to do that than go into an abandoned one again.

I did go on a tour to Chernobyl and Pripyat in 2009, but that was… a tour. We were permitted to be there. I remember a few years ago too, around 2015, being in Bangkok and wanting to go find the Sathorn Unique tower and see about getting in there. Back when you still could.

Whether I’d have enjoyed it or not, in hindsight, I don’t know. It would have been a place I wasn’t supposed to be. I don’t suppose it matters now either way. What does matter though is giving some shouts to a couple of the people I met on this day.

The first is a guy who loves shooting abandoned places, does it very well, and has no interest in shooting people on the street. Just like I described earlier. His Instagram is here.

The second does both types of photography and more, and again does them all very well. If you’re ever in Shanghai and want to get into the WeChat group, give him a shout. His Instagram is here.

If you enjoyed that post, why not take a look at these others to stay inspired or learn more about the Kodak Colorplus 200 film I used here:

And if you think others will enjoy this tiny foray into Shanghai UrBex too, help them find it by sharing or pinning.  😀